Poverty, Carbon and the Role of Natural Gas

Each year AIPN hosts an annual lecture series in honor of Alfred J. Boulos, former AIPN president and highly-regarded international petroleum negotiator. The AIPN 2019 Boulos Lecture, presented at the International Petroleum Summit, May 23, 2019, featured Dr. Scott Tinker, Director of the Bureau of Economic Geology, the State Geologist of Texas, and a professor holding the Allday Endowed Chair at The University of Texas at Austin, on the topic of poverty, carbon and the role of natural gas.

Economic poverty and climate change are two major challenges facing humanity. At the heart of economic poverty lies an energy paradox: energy cannot lift the world from poverty, yet poverty cannot be ended without energy. Over 2 billion people in the world suffer from some form of energy poverty. At the heart of climate change lies another energy paradox: climate models suggest that current warming results from combustion of fossil fuels producing carbon dioxide, yet 85% of the world’s energy that is needed to adapt to climate change comes from fossil fuel combustion. Reducing global poverty, and realistic carbon policies, are not mutually exclusive. There exists a “radical middle” that can address both, and still preserve a healthy global economy. Natural gas has a major role to play. 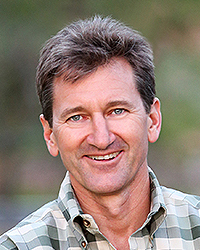 Director, Bureau of Economic Geology, The University of Texas at Austin

Dr. Scott W. Tinker works to bring disparate groups together to address difficult challenges. Dr. Tinker is director of the Bureau of Economic Geology, the State Geologist of Texas, and a professor holding the Allday Endowed Chair at The University of Texas at Austin. He has served as president of the American Geosciences Institute, the Association of American State Geologists, the American Association of Petroleum Geologists, and the Gulf Coast Association of Geological Societies. Dr. Tinker has received the Campbell Medal, Halbouty Medal, and Boyd Medal, the highest honors given by the AGI, AAPG and GCAGS respectively. He is a Fellow of the Geological Society of America. In his visits to nearly 60 countries, he has given 700 keynote and invited lectures to government, industry, academic, and general audiences and he serves on many boards and advisory councils. Tinker co-produced and is featured in the award-winning energy documentary film Switch, which has been screened in over 50 countries to more than 15 million viewers and is used on thousands of K-12 and college campuses. Dr. Tinker formed the not-for-profit Switch Energy Alliance and is working on a new film project, Switch On, addressing global energy poverty.