The Theory and Practice of Dealmaking: Secrets of Successful Dealmakers

Originally presented at the AIPN 2016 International Petroleum Summit in Houston

Theory and practice meet in this thought-provoking session with Harvard Professor Guhan Subramanian, author and negotiation expert. In his session, Professor Subramanian will connect the dots between the science of negotiating and the real world conditions encountered by international negotiators by first providing a review of core concepts in negotiations. Then, he will dive deeper by demonstrating how vocabulary such as BATNA, ZOPA, and reservation price can provide a systematic approach to prepare you for your most difficult negotiations, and guide you through best-practice strategies for scenarios that are common in the oil and gas sector. Other topics will include: game-changing moves in competitive  bidding situations; managing counterparties who may not be as sophisticated and/or may have a  different negotiation mindset; and managing situations where the other side gains bargaining leverage  after physical capital has been committed to the region. Attend this session and be better prepared for dealmaking. 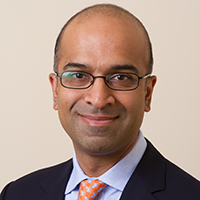 Guhan Subramanian is the Joseph Flom Professor of Law and Business at the Harvard Law School and the Douglas Weaver Professor of Business Law at the Harvard Business School.  He is the first person in the history of Harvard University to hold tenured appointments at both HLS and HBS.  At HLS he teaches courses in negotiations and corporate law.  At HBS he teaches in several executive education programs, such as Strategic Negotiations, Changing the Game, Making Corporate Boards More Effective, and the Advanced Management Program.   He is the faculty chair for the JD/MBA program at Harvard University and the Vice-Chair for Research at the Harvard Program on Negotiation.  Prior to joining the Harvard faculty he spent three years at McKinsey & Company.

Professor Subramanian's research explores topics in corporate governance, corporate law, and negotiations. He has published articles in the Stanford Law Review, the Yale Law Journal, the Harvard Business Review, and the Harvard Law Review, among other places.  Ten of his articles have been selected as being among the “top ten” articles published in corporate and securities law in their respective years, among the 400+ articles that are published each year, by scholars in the field.   The recently-published two-volume treatise Law & Economics of Mergers & Acquisitions, which includes 33 “seminal” articles from the field over the past 45 years, contains four of his articles, more than from any other scholar.  His book Dealmaking: The New Strategy of Negotiauctions (W. W. Norton 2011) synthesizes the findings from his research and teaching over the past decade.   This book has been translated into Chinese (Mandarin), German, Japanese, Portuguese, and Spanish.  He is also a co-author of Commentaries and Cases on the Law of Business Organization (Aspen 4th ed. 2012), a leading textbook in the field of corporate law.